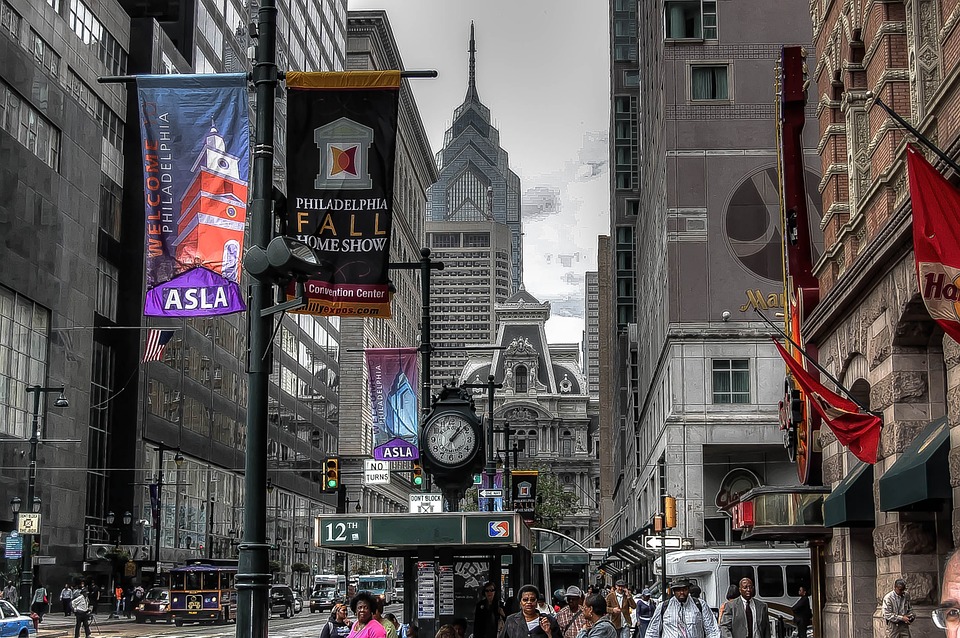 continued from Part One.

William Penn and the founding of Philadelphia (cont’d)

A group of Quakers seeking religious freedom, led by Penn, took a trip up the river and founded the first site called Philadelphia on lands that he had purchased from the leaders of the Lenape and Delaware nation. It was the beginning of a long, peaceful period for the colony and the natives, who had not gotten along with the Swedish and Dutch settlers that came before. Such was not the case with the Conestoga nation, which was settled to the west. Lord Baltimore and Maryland declared war on the Indians, with whom they had previously enjoyed a mutually-beneficial trade relationship exchanging furs for tools and firearms. As English Quaker and German Anabaptist, Lutheran and Moravian settlers flocked towards the spiritually-tolerant colony, the territory bulged westward, aggravating the indigenous people. Furthermore, the Dutch, Swedish, and English settlers down in Delaware (as it is now known) did not approve of Penn’s devoutly Quaker government. As they had no historical or national ties to Pennsylvania, they petitioned Penn for their own assembly. That request was granted in 1704 when the semi-autonomous colony of Lower Delaware was established from the three offshoot counties that formed southernmost Pennsylvania.

Philadelphia as an American colony

New Castle was established as the capital of Pennsylvania colony, due to its prominence, influence, and wealth. As an influx of Swedish settlers moved into what is now southern New Jersey, more and more English settlers flocked to Philadelphia. This strengthened the port on the Delaware River. As the thirteen original colonies were established and started to gain power, Philadelphia gained a foothold as an important colonial city. Of course, you can’t mention Philadelphia’s presence in the colonies without stating its significance in the American Revolution. The site of both the first and second Continental Congresses, Philadelphia was chosen to be America’s capital following success in the Revolution. Its tenure as capital lasted from 1790-1800. Even today, Philadelphia is known as the birthplace of America, and it played a critical role in several events that took place during the war.

Development through the Civil War

Although federal and state governments relocated away from Philadelphia as the 19th century dawned, the city maintained its clout as the United States’ center for finance and culture. With its sizable free black community, fugitive slaves were aided on their escape from the south, and the first independent black denomination in the nation, the African Methodist Episcopal Church, was founded. Philadelphia established itself as an industry-leading center of commerce in several areas, the most prominent being textiles. At this point, the city had strong ties to the South. Many southern planters kept holiday residences in Philadelphia and had business connections with Philly banks. Many a southern belle completed her education at French finishing schools in Philadelphia run by refugees from modern-day Haiti, which was then known as Saint-Domingue. Southern cotton was processed at Philadelphian textile mills, which turned around and sold cotton products back to the south, such as clothing for slaves. Although Pennsylvania ultimately went strongly for the Union, there were plenty of southern apologists in the city at the beginning of the skirmish known as the American Civil War.

Politics and development into the 20th century

After the War, Philadelphia became known as a Republican stronghold. Government corruption ran rampant, as those in power were made stronger by patronage. The extent of problems with the government exploded into public outcry for reform by the mid-20th century. Reform came around piecemeal, with efforts to clean up city government meeting with success. Notably, in 1950, a new city charter empowered the mayor’s position to a greater extent and drained some of the power from the swamp that was the city council. A political change was in the midst of happening: during the Great Depression, voters began switching from Republicans to Democrats. This was spurred by the widespread support for local hero Franklin Delano Roosevelt, who was elected President after having been active in local politics by many years. The population burgeoned, with immigrants from Ireland, Southern Europe, Eastern Europe, and Asia, as well as the Great Migration of blacks from the rural South and Puerto Ricans from the Caribbean, all attracted to the city’s expanding industrial jobs.

Population loss and regrowth into the modern era

After World War II, Philadelphia lost residents in droves as families relocated to the newly-created suburbs. Industrial restructuring cut tens of thousands of jobs, leading to a major upswing in poverty and both gang and mafia violence. These were dark days for Philadelphia. By the end of the 20th century and beginning of the 21st, however, something amazing happened. Revitalization and gentrification of historic neighborhoods attracted an increase in middle-class population as people began to return to the city. New waves of immigration brought fresh energy and vivaciousness to Philadelphian culture, making it the destination we know today. And incentives developed in the 1990s and early 2000s contributed to a condo boom in Center City and surrounding areas, cleaning up the city’s image and making it the booming, exciting, multicultural global hub that it is today.