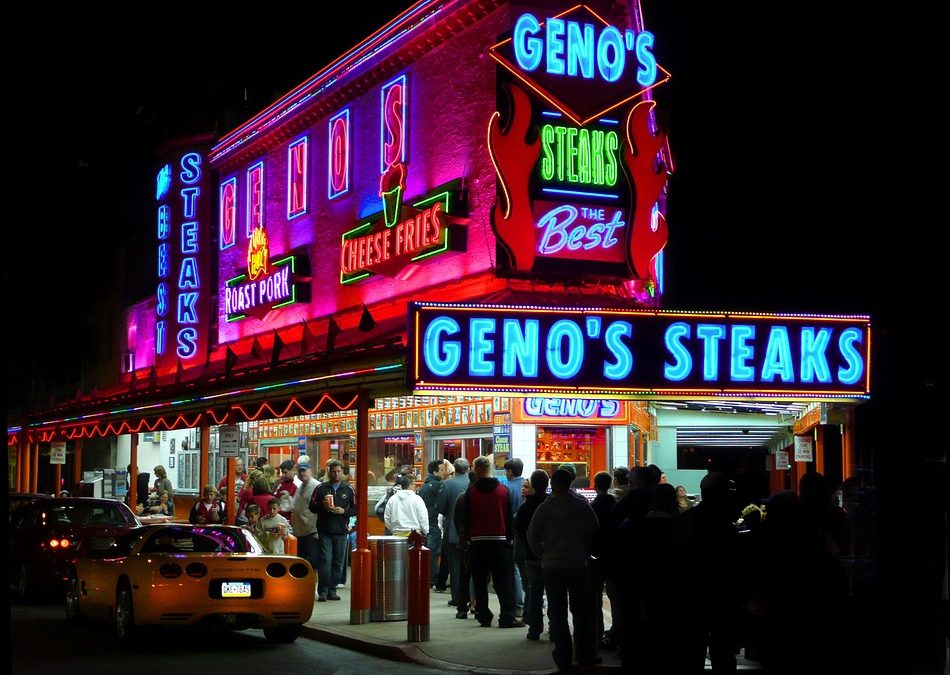 Is there any food item quite as quintessentially Philadelphian as the cheesesteak? This iconic sandwich is so sacred to the City of Brotherly Love that it ranks right up there with Rocky, the Liberty Bell, and dumpster pools. How much do you know about the origins and composition of the cheesesteak? Let’s dive in.

What is a cheesesteak? It’s a form of fast food, regional to the Delaware Valley (although you can find bastardized versions all over the United States). A sandwich at heart, the cheesesteak is stuffed with thinly-sliced beefsteak and melted cheese in a hoagie roll. While there are countless variations and other additions possible, this is the basic formula.

The cheesesteak has been around for a little under one hundred years, developed in the early 20th century by combining “frizzled” beef, onions, and cheese in a specially-baked, small loaf of bread. You’ll undoubtedly hear otherwise from various sources, but the most agreed-upon history has brothers Pat and Harry Olivieri creating the cheesesteak in the 1930s. The Olivieris owned a hot dog stand in Philadelphia and, as legend goes, decided one day to make a new sandwich with chopped beef and grilled onions. It was never meant to be more than an experiment, but a passing cab driver saw the sandwich and requested one for himself. Impressed, he suggested to the brothers that they quit the wiener biz and focus on these new delights.

Pat and Harry made the sandwich a menu staple at their hot dog cart, which they parked near the Italian Market in South Philly. Eventually, the demand for the steak sandwiches became so overwhelming that Pat opened his own restaurant, which exists today as Pat’s King of Steaks. You’ll note that the original sandwich was prepared “wit'” onions and without any cheese. Olivieri credits “Cocky Joe” Lorenza, a manager at Pat’s Ridge Avenue location, with first adding provolone to the creation.

From there, the popularity of the “cheesesteak” exploded. Imitators took the idea and ran with it, with the sandwich showing up on the menu of dozens of family-owned businesses. Nowadays, you can find cheesesteaks everywhere from fast food restaurants to high-end eateries, made with tender prime beef and imported cheese! Outside the city, it’s known as a “Philly cheesesteak.” But here, we just call it a “cheesesteak.”

The heart and soul of the cheesesteak is the meat. Traditionally, the filling of the sandwich is rib-eye or top-round, sliced paper-thin and then browned and scrambled with a flat spatula into bite-sized bits on a lightly-oiled griddle at medium heat. You add the cheese of choice, allowing the heat from the griddle to melt it, and then the roll is set atop the cheese. The same spatula is used to scoop the whole concoction into the roll, which is then halved and served.

Although sauteed onions are the traditional topping of a Philly cheesesteak, you can also find places that will, on request, add bell peppers, mushrooms, hot sauce, ketchup, and/or salt and pepper. Since onions are considered the default, you expediently order a cheesesteak either “wit” or “wit’out,” referring to whether you want them or not.

No matter where in the city you go, one common thread between all Philly cheesesteaks is the necessity of an Amoroso roll as the basis of the sandwich. The Amoroso is known for being just the right length, pillowy soft, and slightly salted to enhance the flavor of what’s put between its halves. It’s been argued that a “true” Philadelphia cheesesteak (a phrase fraught with contention, just so you know) must have the meat, either provolone or Cheez Whiz – never swiss, as presidential candidate John Kerry discovered to his detriment while hitting Philly on the campaign trail and visiting Pat’s in 2003 – and a real Amoroso roll. Risk and Insurance magazine, commenting on the dispute between chopped or sliced steak and the never-ending Cheese Wars, declared “The only thing nearly everybody can agree on is that it all has to be piled onto a fresh, locally baked Amoroso roll.”

If you want to refer to the authority, Pat’s King of Steaks uses Cheez Whiz on their sandwiches. While the spray-cheese product was not available in the 1930s, it has spread in popularity since it was first marketed in 1952. In a 1985 interview, Pat Olivieri’s nephew Frank Olivieri rationalized the ise of “the processed cheese spread familiar to millions of parents who prize speed and ease in fixing the children’s lunch for the same reason, because it is fast.” Cheez Whiz is “overwhelmingly the favorite” at Pat’s, outselling runner-up American by a ratio of eight or ten to one.

At Geno’s, across the street, they claim to go through eight to ten cases of Cheez Whiz a day. However, owner Joey Vento recommends provolone, calling it “the real cheese.” Both provolone and American cheese are used on cheesesteaks for their mild flavor, which doesn’t overwhelm the steak, and their superb meltiness. Philadelphia Inquirer restaurant critic Craig LaBan says “Provolone is for aficionados, extra-sharp for the most discriminating among them.”

So, there you have it: basically everything about the Philadelphia cheesesteak that’s fit to print. I myself like mine with onions and American cheese, although I’ll take some Whiz when I’m in the mood. How about you?