What to Do About the Faded Rainbow Crosswalks in the Gayborhood? 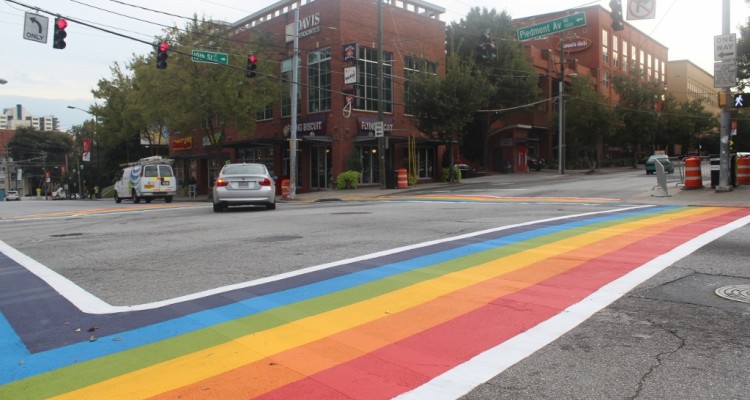 Atlanta's rainbow crosswalks are in great condition. Making those of Philly's Gayborhood permanently crisp would have a heavy price tag.

Philadelphia’s Gayborhood has a loud, proud tradition of supporting equal rights for all and for showing its pride year-round. Part of the Gayborhood’s symbolic flamboyance has been, since 2015, its brightly-colored rainbow crosswalks. Streaked in red, orange, yellow, green, blue, and purple, the crosswalks represent with each color an aspect of LGBT life. Red is for life, orange is for healing, yellow is for sunlight, green is for nature, blue is for magic/art, indigo (which is not present in the crosswalks) is for serenity, and violet is for spirit. Hot pink, which used to be the first color in the flag, traditionally stood for sex.

Unfortunately, time has not been kind to the crosswalks. The rainbow paint is chipped and extensively faded. Workers have painted arrows over the colors, and at one intersection, jackhammer work to fix a broken water main destroyed the entire thing. At this year’s Pride celebration, the nation saw the rainbow crosswalks of Philadelphia in a sorry state indeed. Everyone seems to agree that they need to be fixed, but few can agree on who should pay for it.

An obvious solution to the problem is a material called Thermoplastic, which is used for the rainbow crosswalks of West Hollywood, CA, Atlanta, and Seattle. The problem, however, is the cost. It’s estimated that it would cost $30,000 to redo the crosswalks of the Gayborhood. The Philadelphia Inquirer says that there is a possibility of an anonymous donor covering the costs, but nothing has yet come to fruition.

Amber Hikes, Philadelphia’s LGBT affairs director, spoke to the Inquirer: “Hikes has been in talks with the Streets Department for more than a year to discuss the logistics of planning a new crosswalk. She said recently that she didn’t have a timeline for when the city might move forward, but she called the rainbow crosswalks a critical symbol.

“I feel like it’s important, especially during this time in our country’s history, that we as LGBT people assert our identity,” Hikes said. “That kind of visibility is really an act of resistance.”