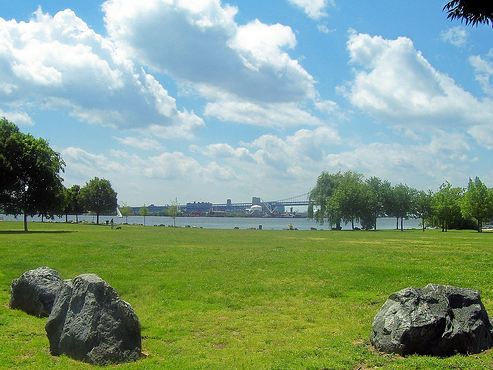 Fishtown is a neighborhood located immediately to the Northeast of Center City Philadelphia.   The name “Fishtown” is derived from the area’s former role as the center of the shad fishing industry on the Delaware River. The name comes from the fact that a number of 18th and early 19th centuries German and German-American families bought up the fishing rights on both sides of the Delaware River from Trenton Falls down to Cape May, New Jersey.   In recent years Fishtown has experienced moderate gentrification characterized by significant rises in housing prices and the opening of upscale art, entertainment, and dining establishments. An influx of artists and professionals has joined the ranks of police officers, fire fighters, nurses, carpenters, electricians, stonemasons, plumbers, sheet-metal workers, and teamsters.  The Fishtown neighborhood was chosen by the state of Pennsylvania to be the site of the SugarHouse Casino gaming complex on Delaware Avenue near Frankford Avenue. This choice deeply divided the neighborhood, causing conflict between those who believe it will bring jobs and economic development and those who believe it will lead to increased crime, addiction, and other social problems which negatively impact on quality of life. A Community Benefits Agreement was reached between SugarHouse Casino and the membership of Fishtown Action and the New Kensington CDC, which will provide money for community projects that would not otherwise be available to the residents.  Fishtown’s borders are disputed but traditionally are defined by the triangle created by the Delaware River, Frankford Avenue, and York Street. Some newer residents expand the area to Lehigh Avenue, while some older residents shrink the area to Norris Street.